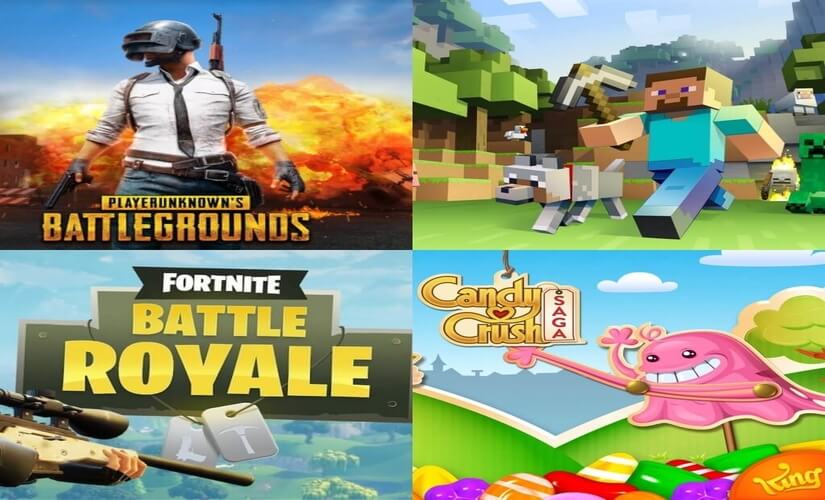 They also know how addictive these mobile games are, which explains why even kids are constantly on phones these days!  When people are not working or not doing social media networking, they are mostly busy trying to go up levels in these mobile games. While they still do use laptops or PCs for playing, mobiles have become a much more comfortable option, as they are more compact and can be carried anywhere.

The Trending Mobile Games of 2018!

Now let us have a look at the most played mobile games of 2018 (in random order)!

PUBG Mobile is undoubtedly the hottest game of the season. It was launched in the year 2017 and soon made it to mobiles from computers. While the PC version costs money, the mobile one is completely free. The game is mostly about a number of fighters battling it out until there is only one winner. While some features of the game that are there on the computer version are missing in the mobile one, the fun element is still there. Also, most of the elements of the original game such as all the original weapons are still intact.

Just like PUBG, Fortnite: Battle Royale was also released for computers first and then adapted for mobiles. The game consists of around 100 players, playing usually one-to-one or with two or three players each. They need to find weapons and other resources while fighting it out with the other players for their lives. While the game doesn’t look as attractive on a mobile as on a PC, the little indicator which shows the direction of the gunfire is a good addition. The PC is still without a doubt the better option for playing the game, but those who want to play it anywhere, anytime, the mobile version is the way to go.

Alto’s Adventure is a snowboarding game where the player while moving through beautiful landscapes, has to complete certain goals. There are altogether 180 of those goals. The game has stunning visuals and a fine background score which make it even more appealing. It has been appreciated right from the beginning for its eye-catching look.  Alto’s Adventure was originally released for only IOS devices, but later in 2016, it was released on Android as well.

Minecraft modpacks, a sandbox video game, was released in the year 2011. It was originally meant for PC, but later made its transition to mobile phones, which came to be known as the Minecraft Pocket Edition. The game is basically about building blocks in a 3D world, with no particular goals to chase. Thus, it gives the players a lot of freedom and also requires a great deal of creativity from them. Over the years, the game has become extremely popular and has won awards as well.

According to Wikipedia, by the middle of 2018, it had 91 million active players monthly.

Pro Evolution Soccer has been a popular choice with the soccer fans for a long time now. While it was released on computers years back, recently a mobile version has always been adapted for Android and iOS. According to Wikipedia, there were more than 150 million downloads of this game by August 2018. It has always received excellent reviews from critics and has been seen as a benchmark for other sport video games to match.

Clash of Clans is a mobile game which was initially released on iOS devices and later on Android in 2013. It is a multiplayer game where players from various clans fight it out amongst themselves to gain currencies, namely gold, elixir, dark elixir and gems which help them to build their town. Over the years, it has become one of the top grossing apps on Google Play as well as App Store. It has generally received favorable reviews from critics with a score of 80% on GameRankings.

Candy Crush Saga is an immensely popular game which was released in the year 2012, for Facebook and later on for Android, iOS and Windows. It is basically a matching game where the players have to match candies of the same color. A match of three candies gets them removed and new candies fall into their places. As the players keep matching these candies, they gain points and go up the levels.

The game has garnered positive reviews throughout and because of its massive popularity has become a part of pop culture. According to Wikipedia, after 5 years of being released on mobiles, Candy Crush Saga has had over 2.7 billion downloads and is one of the highest grossing and most played games of all time.

Pokemon Go had become an obsession with the masses in 2016, the same year it was released. It is a game where the players track virtual creatures through GPS, and these creatures called Pokemon to seem like they are in the real world, even though they are not. While it is not as crazy popular now as it was in 2016, it is still one of the most played games out there. According to Wikipedia, as of May 2018, it has 147 million users on a monthly basis. Also, Wikipedia states that the total amount grossed by the game has been around $2.01 billion, as of September 2018.

N.O.V.A. Legacy is a successor of N.O.V.A., an adventure game originally introduced on the iOS devices, but later released on Android as well in 2017. N.O.V.A. is basically a shooter who has to fight against alien enemies called Xenos. The storyline is inspired by other sci-fi characters and movies. N.O.V.A. has received positive reviews from the critics and has a score of 94/100 on Metacritic.

Vainglory is a mobile game for both iOS and Android devices, based on the MOBA genre. It is a battle game where the players of two opposing parties fight to wipe out the enemy’s base. The game has been praised for its design and graphics but has received mixed reviews for lacking team communication features. Vainglory was also named as the best iOS game of 2014 by The Guardian.